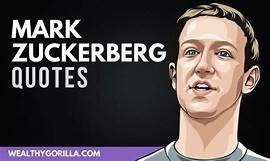 The biggest Risk is, not taking any Risk”

“Find that thing you are super passionate about, then Just do it !!!

“Entrepreneurship is about creating change for a better World”

“Some people dream of success, while others wake up and work hard at it.”

“Internet is really good, because it helps people get access to more info – for more knowledge and to make better decisions”

“Our mission is to give everyone the power to share anything with anyone.”

“Helping a billion people connect is amazing, humbling and by far -the thing I am most proud of in my life.”

Who is Mark Zuckerberg?

There are very few people who are not aware of Mark Zuckerberg as he’s the founder in 2004 of the widely popular Social Media platform Facebook. He is an American media magnate, internet entrepreneur, & philanthropist. He is best known for co-founding Facebook and now serves as its Chairman, CEO and controlling Shareholder. He also is a co-founder of the Solar sail spacecraft development project Breakthrough Starshot and serves as one of its board members.[5]

Zuck was born in 1984 in New York state. His father is a dentist and his mother is a psychiatrist. He was writing Computer programs already when he was in Middle school. He wrote an Instant Messaging program for Computers before AOL released their IM. Even in HS, Zuck excelled in his classes. In his Junior year, he won several prizes in Sciences. He was also the captain of the Fencing team. He was considered a prodigy when he entered Harvard. He was 20 years old when he and his friends launched Facebook in 2004. There was even a Movie made about this.When he was 26 years old, Facebook reached its 500 Million users-mark, and reached 1 Billion users by 2012. In 2007, at age 23, he became the world’s youngest self-made billionaire. In 2008 he was named by Time Magazine as Person of the Year. Forbes lists him as #5 in the world’s billionaires, the 3rd richest person in Technology in 2016, and America’s Richest Entrepreneur under 40.

Since 2008, Time magazine has named Zuckerberg among the 100 most influential people in the world as a part of its Person of the Year award. In 2016, Zuckerberg was ranked 10th on Forbes list of The World’s Most Powerful People. He’s the only person under 50 in the Forbes ten richest people list and also the only one under 40 in the “Top 20 Billionaires” list. His social networking company Facebook has over 2.7 billion active users monthly. Facebook is undoubtedly the #1 Social Media platform. As of March 2021, Zuckerberg’s net worth is $103.6 billion,[ making him the 5th-richest person in the world. (from a Bloggers Passion) 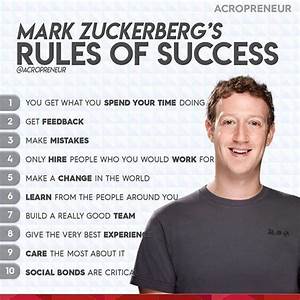 Since 2016, Mark Zuckerberg, chairman & CEO of Facebook, was listed among the top 10 most Powerful people in the World. To be included in that list at a young age of 32, and estimated to be worth more than $60 billion is simply amazing. In this Blog we compile Zuck’s 10 Rules that helped him become a very wealthy, influential & successful person. (fm Project Mgt SW)

1. You Get What You Spend Your Time Doing

Zuck believes that people get the equivalent of what they put in. And if people spend time on important things, even only 1/3 of their time, it will accumulate over time and produce Gr8 results. Therefore, it is important that people prioritize and spend time on important things. For him, spending time to help people get better, to hire better people, and to mentor – among others – will – over time, result in a better company.

At Facebook, Zuck revealed that they have a tradition where every week, he & his employees have a Q&A session. People can ask him about anything – especially what is going on with the company, what direction it is taking, & other similar questions. It is important to him for two things: 1) they value openness & communication + more importantly, 2) it is an opportunity for him to get feedback and learn what are the things on people’s mind. In many occasions, the feedback helped them re-evaluate, change how they do things and how they approach different problems.

When starting a company, many mistakes will be made. When people ask him for advice on what mistakes to avoid, he answers that do not even bother to avoid them. The more important thing is to learn quickly from the mistakes, and not to give up. He believes that nothing is impossible, and that the best attitude is just to keep running through every obstacle that presents itself.

4. Only Hire People That You Would Work For

5. Make A Change In The World

When starting something, whether a product or a company, people will face a great number of challenges. Therefore, it is important that they be headstrong and not give up, according to Zuck. Successful people who started companies – usually did not start for the sake of starting a company. They believed that they have something that can change the world & help people. With that in mind, people can face the challenges that come up, and find tools & people that can help with their mission.

6. Learn from the People Around You

Zuck stated that a good definition of a Team is “a group of people that can make better decisions as a whole, better than they can individually. He also believes that smart people like learning. Since starting a company can have a steep learning curve, being with your team and learning a good amount of things is absolutely necessary.

In connection with the previous rule, it is really important that people know it is the Team that makes a company successful, and not just one person. Therefore, it is critical for an entrepreneur who is building a company to first and foremost build a good Team. Zuck revealed that he spends at least 3 hours a day with his core Team. And he spends approximately 25 % of his time finding, recruiting & hiring good people – both outside & inside the company.

8. Give the Very Best Experience

When there is a decision whether to give Facebook users the best experience in reading their News Feed or help businesses reach more people, the answer is always the same. Giving users the very best experience is paramount. Therefore, if businesses want to improve their organic reach, Zuck advises them that all they need to do is include more content that will be valuable to more users.

9. Care the Most About It

Reflecting on how they at Facebook were able to make it successful compared to other companies who had more resources, he draws one conclusion. They just cared more about what they are doing. For the other companies, it was just more of a hobby, but for the Facebook team, they really believed in what they are doing is important. And so he shares this rule to anyone who wants to start something but faces stronger competitors. They just have to care the most about what they do.

Zuckerberg shared that throughout his high school and college years, people that he has established bonds helped bring him to where he is now. Most of his friends that started Facebook with him are still with him running the company. Going through school, the usual focus was on academics and achievements. However, he believes that having friends is equally, if not more, important. And this philosophy is one of the reasons he started Facebook.

BONUS: What else can you learn from Zuckerberg?

Don’t chase money: Mark Zuckerberg never seemed to acquire wealth. Here’s what he said once: “My goal was never to just create a company. A lot of people misinterpret that as if I don’t care about revenue or profit or any of those things. But what not being ‘just’ a company means to me is building something that actually makes a really big change in the world.”So what does it mean? Money comes as a by-product. Don’t chase money, instead, focus on creating an amazing product (or service) that improves the lives of others. Then, you’ll eventually make money – just like Mark Zuckerberg

Mark Zuckerberg is one of the most important people of social media. As such, he also has his fair share of controversies, especially on how a particular movie portrayed his character and how he started his company. However, his actions today, through his company, speaks more about him. Together with Bill Gates and Warren Buffet, he has pledged to donate at least half of his wealth to charitable causes over his lifetime. And it is clear that a combination of skills, passion, determination and purpose in him is what brought him to his current successful state.

Comments: What did you learn from this Post? How will you apply them?

from Sources to numerous to mention. Complied & enhanced by Peter/CXO Wiz4.biz