You are here: Home › Biz Heros & Bio's › 4 Leadership Lessons + 4 Situations we can Learn from a great leader – Ukraine President Zelenskyy 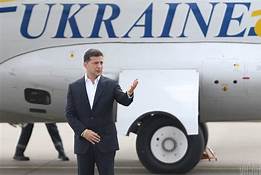 “The fight is here in Ukraine. I need ammunition to fight, not a ride out of our Country” – Zelensky

It was Pulitzer Prize-winning presidential historian Doris Kearns Goodwin who said: “Among the most important leadership qualities are empathy, resilience, listening skills, humility, and self-reflection“.

“Prove that you are with us, Ukraine’s president says to Euro Union”. “United we stand, divided we fall !!!

Vice President Leni Robredo of Philippines said it best: “The number one ingredient of leadership, aside from character, is to stand up in the most difficult times.”

“A president can’t change his country on his own. But what can he do? He can be a good example, role-model !!! – Zelensky

“I am a person who set Goals and works to deadlines !!! – Zelensky

“the Ukrainian president captivates the world with his bravery !!! – Atlantic Zine

Ukraine’s president has described the bombardment of the city of Kharkiv – which killed dozens of civilians – as a War Crime !!!

Anyone can argue about the #1 ingredient of leadership, but we can all agree that the ongoing conflict in Ukraine represents one of the most difficult times ever. This is why Ukraine President Volodymyr Zelensky has gained global attention & respect for his response to the Russian invasion. Here’s what we can learn from him.

Summary: The Artist of the Act of Govt & War

From top to bottom, a leader can come from anywhere in the world. Zelensky was an Actor & Comedian prior to the Presidency. He was elected into office in 2019 – despite being a political novice due to his popular anti-corruption platform that won him a landslide victory over his incumbent opponent.

Despite attempts to belittle his presidential qualifications due to his career as an Entertainer, he had actually studied at the local campus of Kyiv National Economic University, graduating with a law degree in 2000. (an Economics Degree – just like one of our best Presidents – Reagan)

B1. Acting as President.

He grew up as a native Russian speaker in a major city in central Ukraine. Prior to his acting career, he obtained a degree in Law from the Kyiv National Economic University. He then pursued comedy and created the production company Kvartal 95, which produces Films, Cartoons, & TV. Zelenskyy played the role of President of Ukraine in a TV series aired from 2015 to 2019 -which was immensely popular. He thought in might be interesting to be a real President, so he started a political party bearing the same name as the TV show – which was created in March 2018 with employees of Kvartal 95. Married for nearly two decades to one of his Screen Writers and he’s the father of two children.

B2. Running for President.

Zelenskyy announced his candidacy for the 2019 Ukrainian presidential election on the evening of 31 December 2018 – alongside the New Year’s Eve address of then President Petro Poroshenko on local 1+1 TV Channel. A political outsider, he had already become one of the front-runners in opinion polls for the election, because of his Campaign Goals. He won the election with 73% of the vote in the second round, defeating the incumbent. Identifying as a populist, he has positioned himself as an anti-establishment, anti-corruption figure.

B3. As President – early Focus

Zelenskyy has been a proponent of E-government & unity between the Ukrainian-speaking & Russian-speaking parts of the country’s population. His communication style heavily utilises social media, particularly Instagram. His party won a landslide victory in a snap election held shortly after his inauguration as president. During his administration, Zelenskyy oversaw the lifting of legal immunity for members of Ukraine’s parliament, the country’s response to the virus pandemic, subsequent economic recession, and some progress in tackling corruption in Ukraine. Critics of Zelenskyy claim that in taking power away from the Ukrainian oligarchs, he has sought to centralise authority and strengthen his personal position.

B4. His Presidential Agenda

Zelenskyy promised to end Ukraine’s protracted conflict with Russia as part of his presidential campaign, and attempted to engage in dialogue with Russian President Vladimir Putin. Zelenskyy’s administration faced an escalation of tensions with Russia in 2021, culminating in the launch of an ongoing full-scale Russian invasion in this February. Zelenskyy’s strategy during the Russian military buildup was to calm the Ukrainian populace and assure the international community that Ukraine was not seeking to retaliate. He initially distanced himself from warnings of an imminent war, while also calling for security guarantees and military support from NATO to “withstand” the threat. [12] After the commencement of the invasion, He declared Martial Law across Ukraine and general mobilisation. His leadership during the crisis won him widespread international admiration, and he has been described as a symbol of Ukrainian resistance. [Wikipedia]

Zelensky is firm when it comes to representing the political interests of his constituency. His first foreign policy challenge just days into office was Vladimir Putin offering Russian passports to Ukrainian citizens in separatist-controlled areas in the war-torn east. The Ukraine president ridiculed the offer and extended citizenship to Russians and others “Who suffer from authoritarian or corrupt regimes.”

The Russian invasion contradicted Putin’s word that months long military buildup along its border with Ukraine had no intent.

Russia treacherously attacked our independent country, as Nazi Germany did in WWII 80 years ago. Our countries are on different sides of world history: Russia on a path of evil, but Ukraine is defending itself & won’t give up its freedom no matter what Putin thinks. Nonetheless, Zelensky was a step ahead of Russia’s head start.

He promptly delivered a televised plea for Peace addressed to the Russian population, rallied support from the international community, and warned that a “new Iron Curtain” was descending on Europe.As Russia continues to attack Kyiv, the draft resolution is co-sponsored by an unprecedented number of Member States. This proves: the world is with us, the truth is with us, the victory will be ours

Aside from calling for peace and help, Zelensky was ready to defend his country. He called on all citizens who were prepared to do the same to come forward – especially all men 18-60.

Ukraine has submitted its application against Russia to the International Court of Justice. Russia must be held accountable for manipulating the notion of genocide to justify aggression. “We request an urgent decision ordering Russia to cease military activity now and expect trials to start next week” said Zelensky.

The capital of Kyiv issued 18,000 weapons to Ukrainians to defend their country from invading Russian forces.”We will give weapons to anyone who wants to defend the country. Be ready to support Ukraine in the squares of our cities”. he said

Furthermore, the leader doesn’t simply bark orders from an ivory tower. Zelensky fights alongside his men. Putin can’t trust his own officials to be within 20ft of him. Zelensky is a true leader and will go down in history as a hero. Glory to Ukraine. Zelensky chose to stay with his people in the capital, even shooting a video from the streets of Kyiv.

This is while acknowledging that he is Russia’s #1 Target, with his wife & children—also staying put in Ukraine—next on the kill list. Yesterday, while we were sitting in a bomb shelter, everyone glued to their phones, someone turned on the latest video by Ukraine’s president. There were all the right words in it to lift our spirits. The feeling was: “We are so grateful our country has such a great leader in these tough times !!!