You are here: Home › Biz Heros & Bio's › How did Mark Cuban get so Rich? Lessons for Startups & Small Business 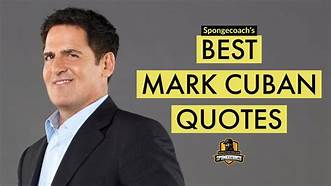 “It’s not in the Dreaming, It’s in the Doing.

“Perfectionism is the enemy of Profitability.

“Selling is never about convincing.             It’s always about helping others

“Everyone tells you how they are going to be “special”, but few do the work to get there. Just Do It !!!

“It’s not about money or connections. It’s the willingness to out-learn & out-work everyone else.

“Sales cures everything. Plan how your company will make $$$ and how you will make Sales.

“Out-do everyone. Out-work. Out-think. Out-sell your competition. There are no shortcuts.

“Most people think $$$ is the key to reducing risk. Preparation & Organization is.

“I still work hard to know my businesses better. I’m continuously looking for ways to improve all my companies, and I’m always selling. Always, Always, Always !!!

“What I’ve learned in life is, you just got to stay focused and believe in yourself; then trust your own ability & judgment

“Forget about just finding your passion. Instead, focus on finding big problems and solving them.

“Ideas are easy. I’ve never met anyone who didn’t think they had a great idea. The hard part is making it into a business.

“Don’t start a company unless it’s an obsession – something you are very passionate about !!!

BIO: (born 1958 = 60+) is an American Entrepreneur, TV personality, Media proprietor, & Investor. He is the owner of the NBA’s Dallas Mavericks,co-owner of 2929 Entertainment, (Content creation & distribution) & Chairman of AXS TV (music & sports). He is also one of the main “Shark” investors on the ABC reality television series, Shark Tank. In 2011, Cuban wrote an eBook, How to Win at the Sport of Business, in which he chronicles his experiences in business and sports. Now his worth is an estimated $4.3 billion, according to Forbes and ranked #179 on the 2019 Forbes 400 list.

How did Mark Cuban get so Rich?

While the majority of this wealth can be attributed to two transactions he made during the early Dot-com era, he is a born entrepreneur and has been buying, Trading, profiting and schmoozing his way to success from the young age of 12. From his first business to today, here’s how Mark Cuban got rich.

Bar None? During his undergraduate studies in Business Administration at Indiana University, Mark Cuban scrounged together $15,000 to buy a Bar. A professor at the university considered the move daring and confessed that he had never seen an undergraduate, or even an MBA student, have a business while still in school. Mark used his business savvy to turn the Bar into the most successful student Bar in town. After his university days were over, he continued to find opportunities to turn underdogs into winners.

Mark’s 1st business after University was MicroSolutions – a computer company – which he sold after 7 years to CompuServe in 1990 for a tidy sum of $6 million. Mark decided to use that money to retire and, for five years, lived the life of a party boy—he bought a Lifetime Pass on American Airlines for $250,000 and flew around the world in a quest and saw over 50 countries.

Retirement ended 5 years later with Mark’s desire to listen to his former university’s Basketball Team’s games. Along with a partner he started AudioNet, which soon expanded to broadcast not only the Indiana Hoosiers games but hundreds of Sports Channels & Radio programs – as well as product launches & fashion shows. The site – AXS TV – was later renamed Broadcast.com, and is one of the first Internet sites of it’s kind in the world – when it had its IPO in 1998. The stock got caught up in the Dot-com frenzy and soared from $18 to $63 in a single day. (3x)

Broadcast.com was later acquired by Yahoo and Mark took in $1.7 billion in Yahoo! stock. He accurately foresaw the dot-com bubble burst and began to option and liquidate his Yahoo! stock as a means to protect his wealth.

a Maverick !!! At the beginning of the millennium, some people were wondering how they had been so wrong about Y2K. Mark, however, was closing the sale on his biggest purchase. For an astonishing $280 million, Mark became the majority owner of the Dallas Mavericks professional basketball team in 2000. At the time, the team was considered the worst in the league, but by 2011 Mark’s management had turned the team into NBA champions. Mavericks Forbes reported that as of end of 2019 the Mavericks are valued at $2.25 billion.

Crypto-Currency. In January 2018, Mark confirmed that the Mavericks will accept Bitcoin and other Crypto-Currency as payment for tickets. Before, Mark was an outspoken critic of Bitcoin and famously called it a “Bubble” in the summer of 2017. Then, he went on to invest in the Crypto-Currency later that same year. Mark continues to expand his role in the Crypto Sphere – investing in tokens offered by Unikrn, an e-Sports startup he funded.

2929 Entertainment, a company that produces & distributes Movies & TV shows. Here, his record is mixed as some of his movies have turned out to be duds. Others have made money, however.

Stock Market. Mark is also known to still be investing large amounts of money $M’s in the stock market. If his skills are as shark (er,sharp) as they were in the early part of the century, there’s no doubt that he’s making a lot of money.

Branding. Having appeared in various shows and movies over the years, Mark is also a prolific media personality. Besides his most famous, Shark Tank, he has also appeared on Dancing with The Stars, Entourage, & Sharknado. They boost his profile in the popular imagination – attracting important & smart people into his sphere of influence. They also bring in more business for him, whether it is in the form of promising Startup investments or new opportunities.

Mark Cuban is a great example of someone who loves business (like Mr Wiz4.biz Peter) and who is dedicated to rising up & becoming a self-made man. In addition to his Media company & Basketball team, he’s also an Investor in everything from toilet seats, various investing websites & sports technologies. For a man who loves to grow businesses and get rich, Mark Cuban has found the perfect way to get incredibly wealthy.

Comments: Is there anything else that has amazed you about Mark Cuban?